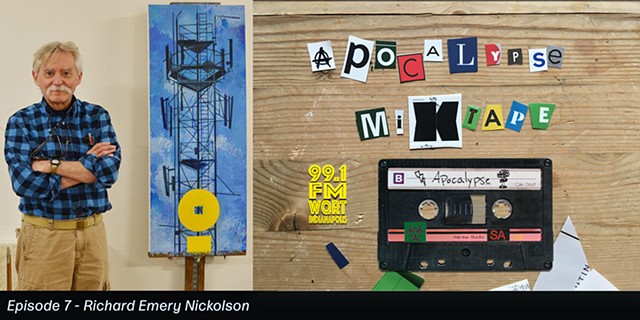 In this episode of Phillip Barcio's Apocalypse Mixtape, the artist Richard Nickolson shares his thoughts on the word apocalypse, along with the songs he would put on his Apocalypse Mixtape. Richard was assigned to the US Army Combat Artist Team XI in 1970-1971. He served as a Professor of Painting, Drawing, Foundations Studies and Critical Thinking at the Herron School of Art and Design in Indianapolis from 1973 to 2010, as well as Visiting Professor at the Pont-Aven School of Contemporary Art in Pont-Aven, Brittany, France, and Artist in Residence at the Vermont Studio Center. He's long been interested in the Imagist poets and their relationship to 20th Century American artists. Richard's work is included in dozens of prestigious institutional and private collections, including those of the Indianapolis Museum of Art, The Library of Congress, and Yale University. He is the author of the Plastic Ekphrastic blog.

(Opening) The End, by The Doors 1. Washington Blues (Smithsonian Folkways Recordings), by Elizabeth Cotten 2. Waist Deep in the Big Muddy, by Pete Seeger 3. The Eve of Destruction, by Barry McGuire 4. In the Year 2525, by Zager and Evans 5. The Chimes of Freedom, by Joan Baez 6. A Hard Rain’s A-Gonna Fall, by Patti Smith 7. To Washington, by John Mellancamp 8. Nobody’s Goin’ Home (Friendship Highway), by Terry Allen