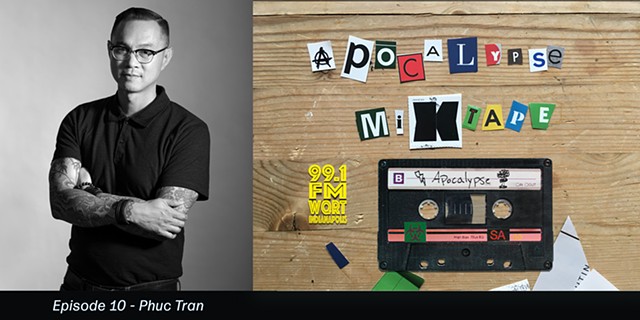 On this episode of Phillip Barcio's Apocalypse Mixtape, Phillip welcomes Phuc Tran, an author, tattooer and high school Latin teacher whose memoir Sigh Gone—about his family’s immigration from Vietnam to a small town in Pennsylvania, and how reading, skateboarding, Star Wars and punk rock music helped him define himself—was recently published by Flatiron Books. A graduate of Bard College, Tran received the Callanan Classics Prize, and has also taught Greek, Sanskrit and German. His TEDx talk “Grammar, Identity, and the Dark Side of the Subjunctive” was featured on NPR’s Ted Radio Hour. He lives with his family in Portland, Maine, where he owns, and tattoos at, Tsunami Tattoo.

(Opening) Reel Ten, by The Plugz 1. What's Going On, by Marvin Gaye 2. Life's a Bitch, by Nas, AZ, Olu Dara 3. Champagne Coast, by Blood Orange 4. Lover's Carvings, by Bibio 5. Quarry Hymns, by Land of Talk 6. Cranes in the Sky, by Solange 7. Swingin' Party, by The Replacements 8. Here's Where the Story Ends, by The Sundays 9. Solo, by Frank Ocean 10. Respiration, by Black Star, Common 11. Love is Stronger than Death, by The The 12. Well I Wonder, by The Smiths 13. When You Sleep, by My Bloody Valentine 14. In Life, by Wunder (JörgFollert)