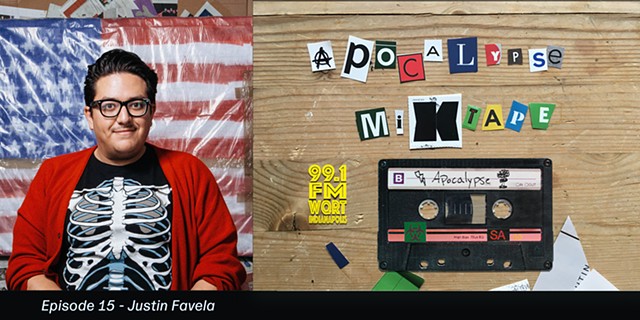 In this episode, Phillip Barcio welcomes artist Justin Favela on the show to share his views on the word apocalypse, and the songs he'd put on his Apocalypse Mixtape. Justin describes his art practice as an exercise in expressing joy as a political act. Based in Las Vegas, Nevada, and known for large-scale installations and sculptures that manifest his interactions with American pop culture and the Latinx experience, he has exhibited his work both internationally and across the United States. His installations have been commissioned by museums including the Denver Art Museum in Colorado, Crystal Bridges Museum of American Art in Arkansas, and the Amon Carter Museum of American Art in Fort Worth, Texas. He is the recipient of the 2018 Alan Turing LGTBIQ Award for International Artists. Favela hosts two culture-oriented podcasts, “Latinos Who Lunch” and “The Art People Podcast.” He holds a BFA in fine art from the University of Nevada, Las Vegas. Social Media Handle: @FavyFav

(Opening) The Gambler, instrumental version, by Kenny Rogers 1. La Romana, by Bad Bunny with El Alfa 2. IN IN IN, by Zebra Katz 3. Jesús de Nazareth, by Los Evangelistas 4. Vaivén, by Balún 5. La Nueva Ciudad, by Balún 6. Got To Give It Up, by Marvin Gaye 7. The Second Time Around, by Shalamar 8. Disco Medley - Live From the Astrodome, by Selena 9. Techno Cumbia, by Selena 10. Tiburon, by Proyecto Uno 11. La Vaca, by Mala Fe 12. LITE SPOTS, by KAYTRANADA