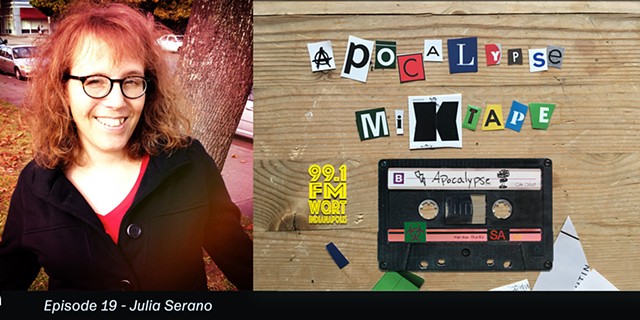 In this episode, Phillip welcomes Julia Serano to Apocalypse Mixtape. Julia is an Oakland-based writer, performer, musician, and activist. She is best known for her 2007 book Whipping Girl: A Transsexual Woman on Sexism and the Scapegoating of Femininity, which readers of Ms. Magazine ranked #16 on their list of the “100 Best Non-Fiction Books of All Time.” Her second book, Excluded: Making Feminist and Queer Movements More Inclusive, appeared on several “best nonfiction books of the 2010s” lists. Julia’s other writings have appeared in over a dozen anthologies, in media outlets such as The New York Times, The Guardian, TIME, Salon, The Daily Beast, AlterNet, Out, Bitch, and Ms., and she has recently published a silly, surreal, and sex-positive novel entitled 99 Erics: a Kat Cataclysm faux novel. In addition to her work as an author, Julia has been a slam poetry champion, and has gained notoriety as the singer/songwriter for the indie-rock trio Bitesize, and with her current noise-pop solo music project * soft vowel sounds *. Visit Julia on the web at juliaserano.com.

(Opening) Evil Ways, by Santana 1. I Remember California, by REM 2. Brand New Love, by Sebadoh 3. Breathing, by Kate Bush 4. Disaster, by Cher UK 5. Fight the Power, by Public Enemy 6. The Lamb Lies Down On Broadway, by Genesis 7. Hardcore UFO’s, by Guided By Voices 8. Smells Like Teen Spirit, by Tori Amos 9. Housequake, by Prince 10. Hate The Christian Right!, by Team Dresch 11. The Bells Are Ringing, by They Might Be Giants 12. Ed Is Fifty, by PEE