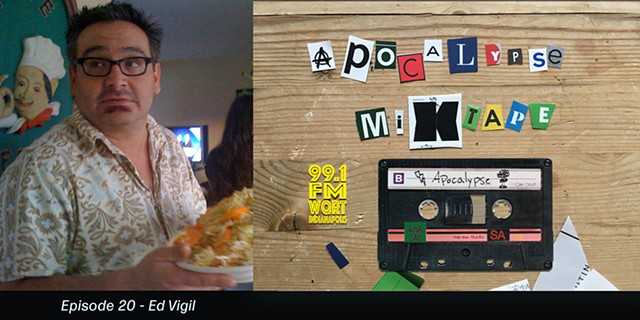 Chef Edward Vigil has worked in some of the most beloved restaurants in the San Francisco Bay Area, including The Olema Inn & Restaurant, Ramblas Tapas, and Anaviv’s Table. A native of Albuquerque, Ed studied the photographic arts at The University of New Mexico. His cooking career began in his grandmother's kitchen in Santa Fe, where he learned about intense flavorts and the importance of having a direct, personal connection to your food. A pioneer in organic, local, and sustainable sourcing, Ed has devoted his entire kitchen career to living and promoting the farm-to-table ethic. Like countless other restaurant professionals, Ed was sidelined by the COVID-19 Pandemic. His grace under pressure, honed by two decades in the restaurant industry, has always enabled him to roll with the punches. In this episode, we hear how he’s adapting to this latest crisis, what his thoughts are about the word apocalypse, and what songs he would put on his apocalypse mixtape.