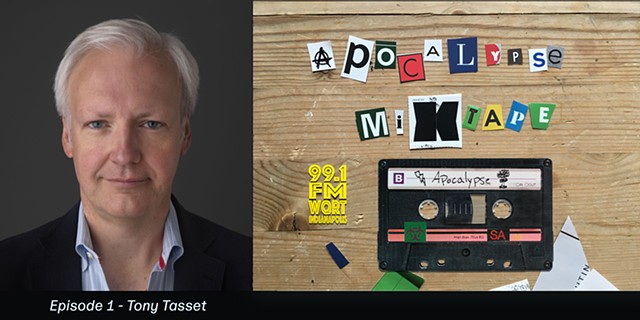 Phillip Barcio welcomes Chicago based artist Tony Tasset to the first episode of Apocalypse Mixtape—an adventure in audio speculation where Phillip asks, "what does the word apocalypse mean to you? And more importantly, next time you face an apocalypse, either personal or global, what do you wanna listen to?" Tony's work was in the 2014 Whitney Biennial and is in the permanent collections of the Carnegie Museum of Art, the Baltimore Museum of Art, the Art Institute of Chicago, the Museum of Contemporary Art, Los Angeles, the San Francisco Museum of Art, among others. He has received the John Simon Guggenheim Foundation Award and the Louis Comfort Tiffany Foundation award, and his large-scale sculptures dot the landscape of many of America’s beloved public spaces, including the lot of Sony Pictures Studios in California and civic plazas in Chicago, Cleveland, Pittsburgh and Dallas. Tasset is an emeritus professor at University of Illinois-Chicago. He's represented by Kavi Gupta gallery.

(Opening) Mother, by Pink Floyd 1. Oh Death, by Ralph Stanley 2. Scream and Scream Again, by Wussy 3. Devil's Pie, by D'Angelo 4. High Water (for Charley Patton), by Bob Dylan 5. Glitter in their Eye's, by Patti Smith 6. Lesson No 1, by Glen Branca 7. Mississippi Goddamn, by Nina Simone 8. You Want it Darker, by Leonard Cohen 9. War Pigs, by Black Sabbath 10. Ask, by The Smiths