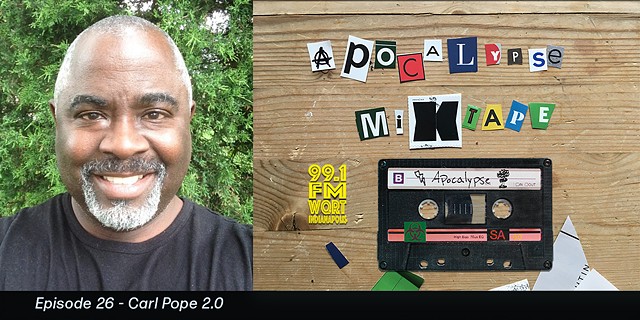 In this episode, the artist Carl Pope returns to Apocalypse Mixtape. Carl first appeared on the show on April 4, 2020, in the early days of COVID-19. His first mixtape explored the darker aspects of humanity’s relationship with apocalypse. Over the course of the Pandemic, Carl’s perspective has evolved. He joins us now, on the day the first COVID-19 vaccine was approved by the FDA, to share his second mixtape. His song selections center the life cycle of relationships, and the importance of seeing beyond what he calls “the interplay of opposites.” Carl earned his BA in Cinema and Photography from Southern Illinois University. Carl’s work was featured in the 2000 Whitney Biennial, and is in the permanent collection of some of the most influential cultural institutions in the United States, including the Whitney Museum of American Art, the Museum of Modern Art in New York, The Cleveland Museum of Art, and the Minneapolis Institute of Art.

(Opening) Runaway, by Kanye West 1. The Folks Who Live on the Hill, by Jimmy Scott 2. The Peasant, by Hope Sandoval and the Warm Inventions 3. My Curse, by The Afghan Whigs 4. Bang Bang, by Nancy Sinatra 5. Miss Sarajevo Passengers, by U2/Brian Eno ft. Pavarotti 6. Monk’s Mood, by Thelonious Monk 7. Blue Aura, by Passport (1976) 8. Sweet Bitter Love, by Roberta Flack 9. Both Sides Now, by Joni Mitchell 10. Desired Constellation, by Bjork 11. Show Me Forgiveness, by Bjork 12. Exhale, by Jonsi